It has already been five days since we came back. How to put into words this extraordinary week and our experience with dolphins? It certainly is a difficult task…

The dolphin therapy first and foremost! Because that was the purpose of this trip. Because we hoped without expecting much. Because it was infinitely better than what we expected. Because it was just indescribable, because all six of us felt the effects!

It was very impressive to watch our three little guys, both anxious and excited at the prospect of meeting these large marine animals. Flip, Benoit’s dolphin, measures a little over a whopping 3 meters!

Diego, our youngest, would have happily waved us goodbye to go swim alone in the sea with Daisy “my own dauphin” as he called it. We watched him tame Daisy with incredible ease and learn to control his movements and impulsivity so as to not see Daisy swim away from him.

Quentin, overwhelmed by anxiety, would try to leave the basin during the first 5 minutes. His imperturbable therapist instilled him with confidence. Frosia did the rest. A few minutes later, we were admiring the same Quentin, smiling in the water, alongside the dolphin. As days go by, we discovered a Quentin we did not know, or very little, a Quentin who expresses better his fears and anxieties, whilsts managing and controlling them better. The flight back was completely calm, which was unthinkable in the past!

Benoit, our eldest, was torn between the fear of the unknown and the desire to experience something new. In a matter of seconds, he was there, sitting next to Svetlana and stroking Flip. He was all smiles and even overcame some of his limitations.

Tears of admiration often came in our eyes as we were witnessing all these small victories achieved through the contact with dolphins.

Thursday morning, therapists invited us, François and I, to meet the dolphins in the basin ourselves. These 4 short minutes beside Daisy took away any nervousness and irritability and filled me serenity. An unprecedented feeling of well-being!

The children each received a stuffed dolphin at the end of their therapy. These were quickly named after the names of their dolphins, Flip, Frosia and Daisy. Since then, our children never leave them and fall asleep holding them. The club was perfect!

The children thoroughly enjoyed running from one pool to the other (we did count a whopping 7 in the club!) and trying the many buffets available. Fries, spaghetti, pizza, hamburgers, chocolate croissants and other all-you-can-eat sweets… our little guys did not know which way to look.

Many thanks for allowing us to be accompanied. Without Jeanique, our week would have been a lot more difficult to manage. It is not always easy to look after three hyperactive little guys in a vast and noisy environment. Being three adults allowed us to comfortably take a shower, calmly accompany the kids to their therapies, be there for them to translate and make sure they are safe during our sea and swimming pool trips.

We would also like to thank you for organizing transport, taxi, plane and bus. It was perfect ! A little anecdote that might help others : upon arriving at the airport and seeing the huge queue for baggage checks, I went to a member of security and explained that it would be difficult waiting in the queue with our little guys whose autistic behaviors can become problematic in this kind of setting. The agent immediately went and explained our situation to the law enforcement officers and helped us move very quickly through all the security controls.

What more can we say, except a huge thank you.

We would never have experienced this extraordinary adventure without you! We are deeply grateful to have been able to take our little guys to meet dolphins and make them benefit from quality dolphin therapy! We had a valuable debriefing at the end of the therapy with therapists Svetlana (for Benoît), Igor (for Quentin) and Kleio (for Diego), which helps us move forward differently with the little guys!

And perhaps most importantly, our little guys had an unforgettable week, as the attached photos illustrate. They cried at having to leave the dolphins there and were saddened by the distance between them and the animals.

A big thank you to the whole team! 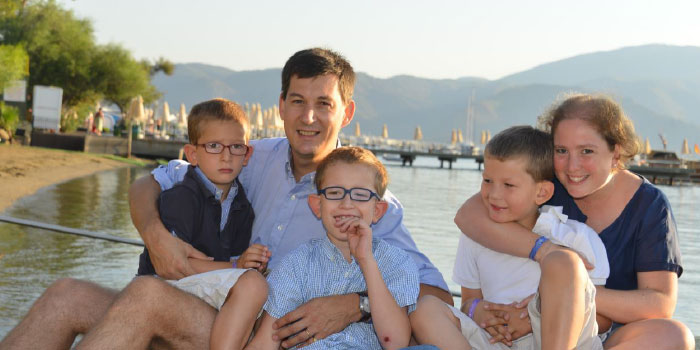 If you want to get in touch with that family concerning dolphin therapy related questions please contact us.