My name is Gerd, I am 46 years old and suffer from Muscular distrophy (HSMN II) since I was 5.

I have always been searching for relief from this muscle illness and at the beginning of this year I became interested in Dolphin Therapy. So I looked it up in Google. I read everything about dolphin therapy that I could in the whole net and compared the different offers. Axel and his team was at the top of the list. At the beginning of March I made an application and couldn’t believe it that I was able to come to Marmaris on May 7. This was just after the opening of the Therapy Centre. I thought about it for 3 days, but then I confirmed the date . Although it was only 8 weeks away, time dragged. But the date arrived ‐ 7 Mai 2007. 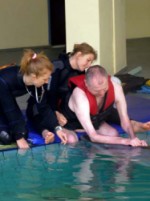 The aircraft took off punctually from Leipzig and 4 hours later we landed in Dalaman. It was 8.45 pm. and the temperature was mild. The car left the airport quickly and we drove through the evening to our destination ‐ the Marmaris Resort Hotel & Dolphinpark. At 11.30 pm I was standing on my bungalow porch listening to the waves on the shore. I could see the pontoon in the water, I could see the heads of Maja, Willi and Flip. A feeling of excitement came over me and I went to bed pretty tired. The next morning I was overcome by the view, what a beautiful part of the world.

The days of waiting were at an end and I met the team. Axel, Elena, Barbara, Michael, Lisa, Coco and Violetta, all gave me a hearty welcome. In the afternoon I met the therapy dolphins Frosia and Daisy for the first time, the therapy could now begin. At first, though, we were in the swimming pool of the hotel because the pontoon was not quite complete.

Excited, I sat on the rim of the pool and waited for my first date with Daisy. After a short while Daisy swam over to me and let me stroke her. Also when I entered the water Daisy came straight over to me. Day followed day and Daisy and I got on well, we had a lot of fun working and playing together. Barbara and Violetta made sure that everything to do with the therapy ran smoothly. The daily 45 minute sessions with Daisy flew by, even though I had a lot of work. 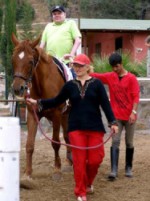 Barbara understood very well how to make me use my muscles so that even after a short time I noticed improvements. This gladdened me but also urged me on to continue the work with full concentration. Axel said straightaway at the first meeting: ‘We’ll put Gerd on a horse’. I had never sat on a horse before. 2 hours after my first dolphin therapy we were on our way to the Dörtnal Ranch. Feliz, Salih and Burak greeted us with such friendliness that any nervousness was instantly banished.

After tea and cake my horse adventure began. Inci stood waiting for me and with the help of a ramp I was quickly sitting in the saddle. At first I was sitting a little cramped, but after a few minutes ‘up there’ I got into the rhythm and began to enjoy it. In order to stabilise my spine after the third Hippo session Salih sat on Inci behind me. My muscles started to relax and we added a few minutes onto the therapy every day. By the end of the Hippo Therapy we were working together so well as a team that we could ride Inci outside of the Ranch. No way was the day at an end after the daily therapies. We met other families of patients in the evening at the pool bar and had a lot of fun. then at some point I fell dog‐tired into bed and fell asleep to the music of the waves. One day followed another and although one wanted to stop the clock it kept on ticking and our stay drew to a close….

I have been at home for 5 weeks and now I can take stock of my experiences with dolphin therapy. After taking my leave from Marmaris, which I did with a heavy heart, I was back home on the evening of the 21st of May. The following week was not to my taste and I was uncertain.

I was just tired out. Now I realise that this was a normal reaction to the 2 strenuous weeks. After a week of relaxation I noticed that my muscles were improving from day to day. I feel a lot better now ‐ I sit in a more upright position than before and moving is fun again. That after 2 weeks of dolphin therapy I could expect no miracles was clear to me from the start.

I am fully content with the progress that I have made and have also continued with the good work. Three times a week I go to physiotherapy which is running well and I also go swimming and riding here. Without dolphin therapy I would never have managed to undertake these things.

Most definitely I shall return to Marmaris as soon as I can for another therapy.

Luke is swimming with dolphins in Turkey Johannes love dolphins
We use cookies to ensure that we give you the best experience on our website. If you continue to use this site we will assume that you are happy with it.OkPrivacy Policy