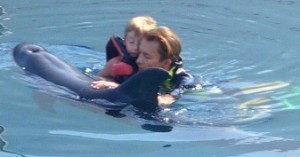 I am Gül Semiz, Mother of Poyraz Semiz. About a month ago we visited you with our child for therapy. Since the therapy Poyraz’s understanding and awareness has appreciably increased, as has also his vocabulary. For the first time he can speak by mimicking our spoken words. Furthermore he is at present trying to use these words (like su – water, bye – bye, yogurt – yoghurt, ye – eat, abi – older brother, baba – father, bitti – finished) at the correct time.

He has understood that he must speak these words (like aç – open, ver – give, gel – come, iç – drink, git – go) so that we can fulfill his wishes. He is in a much better mood – he has become happier and calmer.

He now also goes to Playschool. He has integrated well there and purports himself calm and well-balanced. His sleep cycle is regular and he has a good appetite.

At this point I would like to thank the whole team. We were most satisfied with them. Our Doctor, Mr. Vadim with his friendly and sympathetic commitment, Ms. Ece with her hospitality and perfect organization, Ms. Natalie with her untiring helpfulness, and of course Mr. Alex with his dynamism and sincere friendliness gave us every possible support. If this letter can help other visitors to a better understanding of the therapy, then I would like to describe our case in a little more detail.

Firstly I would like to say that we did not come to you with high-hopes in the expectation of a complete recovery. We saw it more as a chance and to use it as an opportunity to get to know our child better. Personally, I think that the healing effect would not be the same for every child as it was for mine, but with an encounter with these wonderful animals it would definitely be worth a try.

My son Poyraz is 5 years old and has a speech disorder, Diagnosis: NOS-PPDS. The last two years he has been receiving individual speech therapy 3 hours a week. At the beginning of this therapy he could not understand anyone. He received additionally the drug Risperdal which improved his behaviour and concentration a little. During this time he also received a twelve-day music therapy (TOMATIS). With this background we came to the dolphin park in the first half of July 2006.

We know that we still have a long way to go, and we intend to undergo this further phase as we have up until now, namely using all resources in our power.

Parents that have, like us, chosen the dolphin therapy, may experience the same problem that we did, namely that the child is afraid of the dolphin (Poyraz was afraid until the last session, but still entered the water) or even totally refuses an encounter. The first couple of sessions can be used as a warm-up and practice. This reaction is by no means seldom, and parents must be prepared for this and not expect that each of the ten sessions can be used optimally. Sometimes a gradual build-up is necessary.

The Hotel Aquapark is the best in the area; even so, the rooms could be a trifle more comfortable. The swimming pool was good and the landscape was beautiful. The cuisine however could be better. Similar meals were served every four to six days, albeit in different variations, apart from that though we had no complaints.

For an exchange of information you can reach us under:

I hope that everyone’s wishes will be fulfilled.

Kindest regards and I wish you continued success in your work.

It was a great and successful time that we got to spend with you. Sandra has lost her anxiety and rushing. Her concentration is so much better, that she stays and sits at the table, draws longer and more precise, plays board games till the end. She has also made huge improvements with her language. We are very happy to have done the therapy.