We are finally getting around to sending you a little report about the dolphin therapy for our Lutz. Three months have already gone by since our return, and daily life is again making full demands on us.

But what will remain forever are the wonderful memories of our time in Marmaris. To put it briefly: it was a huge success! 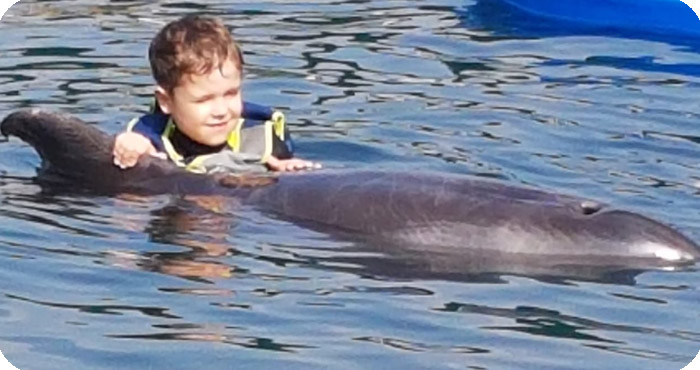 The day finally arrived in October 2019 when Lutz and we flew to Marmaris in Turkey. The hotel was super nice, everything looked very well taken care of, the swimming pool fronting the ocean as a beautiful background, nature and the mountains, which surrounded everything, created a place we could have only imagined in our dreams.

We were greeted by a very friendly therapy team at the Dolphin Center. The therapists explained the dolphin therapy and its processes in great detail. This helped us make a plan for the following days. Lutz was super excited. He lost his early uncertainty quickly because of the outgoing, funny and caring personalities of Daniil and Jule (both therapists). Lutz very quickly got used to swimming in the ocean and to the dolphins. Because of the intensive contact, Lutz and Daniil quickly became best of friends.

We, as the family, were quite taken and touched over how gently Daniil, and especially the dolphins, dealt with Lutz. Lutz was motivated and accepted each challenge. He was extremely focused on the dolphin therapy and quickly fell in love with one of the female dolphins, Daisy. He even painted a picture of Daisy as a remembrance. Almost each time, Liam, Lutz’s brother, was included in the therapy. Everyone made a fantastic team, and also we parents were allowed to dance, kiss, sing and swim with the dolphins.

It was an indescribably beautiful feeling to experience these moments as a family. 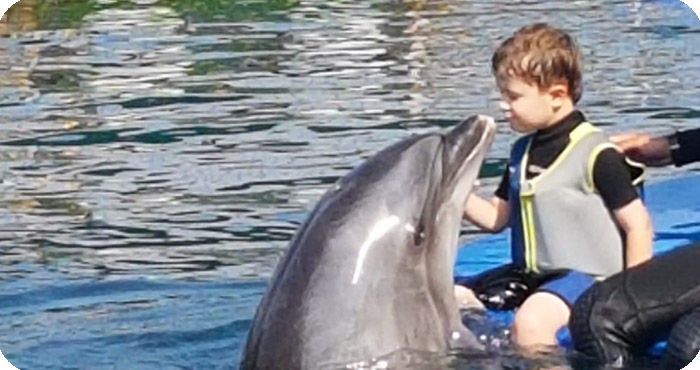 The goal of the dolphin therapy was, among other things, an improvement of the sensory disturbances in Lutz’s feet. Another important goal was to strengthen his feeling of self-worth and to reduce fears. For example, Lutz had to learn to swim with the dolphin on his own and without contact with therapist Daniil. It was quite moving to witness how this goal was reached little by little. Lutz beamed and had so much energy and strength; it was so wonderful to witness his colorful world. It was a huge gift, the unforgettably beautiful and emotional moments Lutz and we received. We hope that all the beauty and zest for life we felt each moment will stay with us. We especially noticed the frequent contact of Lutz’s head by the dolphins. As we discovered later, the dolphin therapy takes advantage of their ultrasound waves. They are said to have a relaxing effect, improve thinking and ability to learn, and even have an analgesic effect. Additionally, they improve blood and lymph circulation and have a regenerative effect, especially on the central nervous system. We finally understood how important it is not to keep dolphins in a concrete pool. When kept in a concrete pool, their ultrasound waves are bounced off the walls. The dolphins find this so annoying that they will quit emitting the sound waves over time. 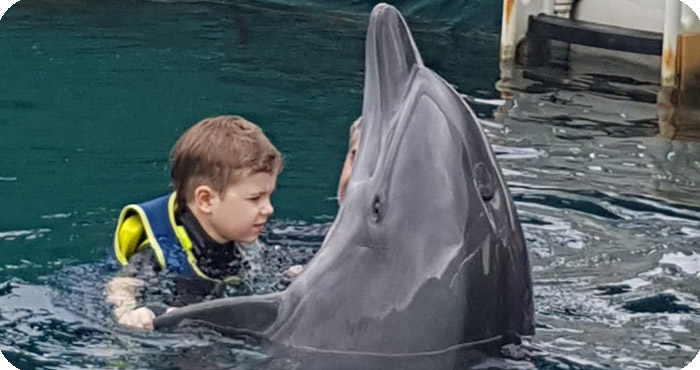 To sum up, we can only say we were highly satisfied with everything and everyone. The Dolphin Park in Marmaris convinces with its competent and sincere team, a well-kept and well-organized facility, and its magic dolphins. Saying goodbye to the therapist team and to the dolphins was very emotional; we all got very close to one another over those 2 weeks. According to the therapists, the positive changes the dolphin therapy will make in Lutz’s life will become apparent within the next few months, since the therapy will continue to have an effect.

It is certain that the dolphin therapy has supported his self-healing power, and we also feel that Lutz has become more self-confident in his daily life. He is also able to better concentrate and has become much more courageous. He appears more open towards other people, and his motor skills have improved and have become more secure. We have already been able to discover much positive developmental progress in Lutz!

Since we are so happy over these positive developments, and Lutz still has much to catch up on due to his severe illness, and also wants to catch up, we will continue to save and we hope that nice people and foundations will support Lutz, so that somehow he will have an opportunity to repeat this fantastic therapy; because we are certain that there are many hidden strengths in Lutz which the dolphins can uncover. It will be a long journey, but we will succeed for Lutz.

We want to express our heartfelt thanks for your support and help in organizing the trip and for the very nice reception. To this day, Lutz continues talking a lot about the dolphin therapy with a big smile on his face. And he says himself that if he could have, he would have stayed with the dolphins.

Many kind regards,
Lutz and the Klauschke Family